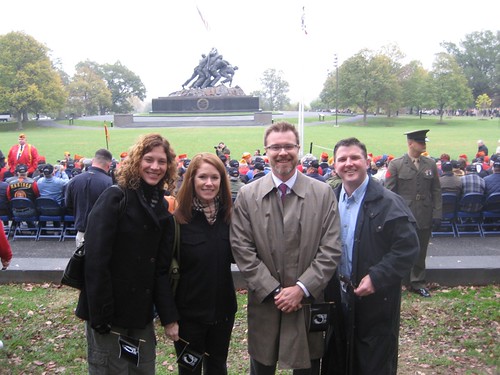 Over the weekend of 9-11 November, five members of our production team for Semper Fi, The Magazine of the Marine Corps League, went to Washington, DC, to participate in celebrating the U.S. Marine Corps 232 Birthday and also the annual remembrance ceremony at Arlington National Cemetery.
Our group – John Lavey, Patrick Burns, Kerri Davis, Carrie Wakeford and Bill Hudgins – first went to the Marine War Memorial in Arlington, often called the Iwo Jima Memorial because it commemorates the raising of an American flag on Mt. Suribachi during the desperate struggle for the tiny island.
We spent part of Saturday afternoon at the year-old National Museum of the Marine Corps, discovering that the riches it holds take far longer than a couple of hours to see, even for the fleetest footed visitor.
Saturday night, we joined our client, the Marine Corps League, at its 2nd annual Birthday Ball. At both the museum and at the ball, Marine tradition was observed as a Marine sliced the birthday cake with a Marmeluke saber and handed the first piece to the oldest Marine present. That Marine took a bite, then handed to the youngestﾑthe passing of tradition and duty from old to new.
Sunday morning, crisp, clear and mild, we joined thousands at Arlington National Cemetery to honor the 48 million American veterans who, starting with the American Revolution, offered all, including their lives, to protect the nation. More than 310,000 of those veterans are buried at Arlington. The Marine Corps League was this year’s host veterans’ group for the national observance, and its commandant, Jack Ryan, was joined at the dais by Vice President Cheney after the vice president laid a wreath at the Tomb of the Unknowns.